Posted on August 31, 2011 by Chef Noah
Collard Greens with Bacon 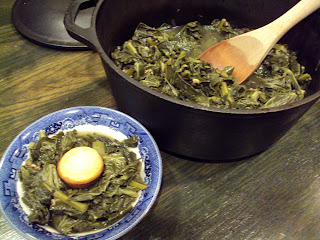 Chef Noah’s tip: Don’t overcook the bacon. It should be barely brown around the edges and still somewhat raw-looking in the middle. If you like potatoes, throw about 4 into the pot when you add the uncooked collard greens.

1 Heat a large skillet on medium heat. Cook the bacon in the skillet until it just begins to brown around the edges, stirring occasionally. Add the onions and cook until they have softened and are just starting to brown.

2 Add the garlic, salt, pepper, sugar and hot sauce. Cook until the garlic becomes fragrant, about a minute. Add the vinegar, bring to a simmer, and cook until the amount of liquid is reduced by half, stirring and scraping up any browned bits from the bottom of the pot.

3 Add the collard greens and the chicken broth (or water) and bring to a simmer. Reduce the temp to medium-low. Cook, stirring occasionally, until the collard greens have wilted and have lost their brightness. Season to taste with additional vinegar and hot sauce. Serve with some of the pan juices from the pan. A hoecake of Southern made white cornbread will complete your supper.

Noah was born in the village of Barnesville, Lawrence County, Tennessee in 1926. His parents were George and Rettie Belew. He was the fifth of six children born to his parents - four males and two females. Noah is the last living member of his Tennessee family. His parents were farmers. They owned a rocky-hilly farm of about 75 acres adjacent to Saw Creek in Barnesville. Their farm's working tools were mules, plows, wagons, hoes, etc. This was before tractors, and even if tractors were available, they could not have been used on the hills where the Belews farmed. Noah has come a long way since the days when he lived on the family farm. Today instead of pushing a plow, he cruises the Florida Gulf Coast, steering his shiny 21st Century Lincoln TownCar during the week and his Mercedes-Benz on weekends. He grows older and wiser, but he continues to be young-at-heart.
View all posts by Chef Noah →
This entry was posted in Country Cookin', Vegetables. Bookmark the permalink.