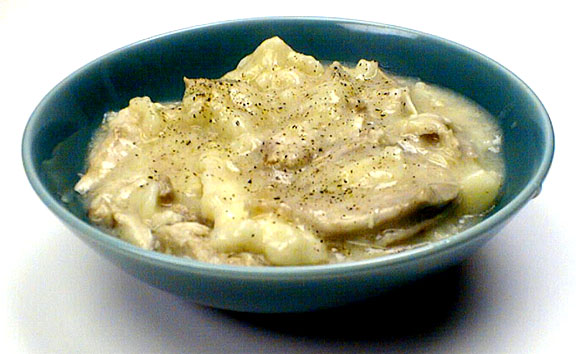 1.)   Combine the chicken and 2 teaspoons of the salt with 2 quarts of water in a Dutch oven. Cover and bring to a boil. Reduce the heat to medium and add the pepper, onion, and celery leaves. Simmer the chicken until the meat falls away from the bone.

3.)   When the chicken is cool enough to handle, remove the meat from the bones and cut into 1-inch pieces. Set aside. Discard the skin and bones. Meanwhile, raise the heat to high and bring the broth to a boil.

4.)   Combine the flour, baking soda, and the remaining 1/2 teaspoon of salt in a medium bowl. Cut in the shortening with a fork and knife or a pastry cutter until the mixture resembles course crumbs. Gradually stir in the milk until the dough is moist. Turn the dough out onto a floured surface and lightly knead for about 5 minutes. Roll out to 1/2-inch thickness and cut unto 1-1/2 inch squares. Drop the pieces of dough into the boiling broth. Reduce the heat to low, cover, and cook for 10 minutes. Stir gently. Add the chicken back to the pot, stir, and cook until the chicken is heated through, about 8 minutes. Serve warm – Serves 6.

Noah was born in the village of Barnesville, Lawrence County, Tennessee in 1926. His parents were George and Rettie Belew. He was the fifth of six children born to his parents - four males and two females. Noah is the last living member of his Tennessee family. His parents were farmers. They owned a rocky-hilly farm of about 75 acres adjacent to Saw Creek in Barnesville. Their farm's working tools were mules, plows, wagons, hoes, etc. This was before tractors, and even if tractors were available, they could not have been used on the hills where the Belews farmed. Noah has come a long way since the days when he lived on the family farm. Today instead of pushing a plow, he cruises the Florida Gulf Coast, steering his shiny 21st Century Lincoln TownCar during the week and his Mercedes-Benz on weekends. He grows older and wiser, but he continues to be young-at-heart.
View all posts by Chef Noah →
This entry was posted in Casseroles, Chicken, Country Cookin', Entrees. Bookmark the permalink.